How To Raise Big Money For Your Kickstarter Campaign 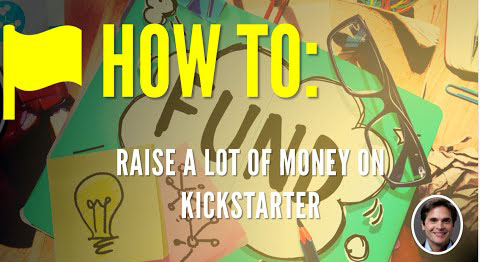 How To Raise Big Money For Your Kickstarter Campaign

Crowdfunding is the one of the newest waves of gaining investors and capital for a product or business; the power to go from zero to launch is staggering. The most famous of these cash harvesting platforms is Kickstarter. In 2014, $529 million dollars was pledged to successfully fund 22,252 projects, however, not all campaigns receive the attention and resources required to take flight.

Continuing in the Fanatics Media Blab series, Fanatics Media CEO Mark Fidelman took to the live streaming platform on November 4th with his guests Iddo Sternberg, Zach Smith, and Thomas Alvord to shed some serious light on how to raise big money for your Kickstarter campaigns. You can check out the full replay here:

Zach Smith is one of the Co-founders and CEO to Funded Today, a leading expert in crowdfunding consulting. This serial entrepreneur graduated as the valedictorian from Weber State University’s Goddard School of Business and Economics and has been putting his expert knowledge to work ever since.

Thomas Alvord is the second Co-founder of Funded Today. With an extensive marketing background including running online campaigns for the U.S. Senate and Governor candidates and multi-million dollar political committees, Thomas knows how to generate some serious revenue. Together Thomas and Zach have raised over $30,000,000 for various crowdfunding campaigns.

Take a look at the advice these crowd-funding geniuses gave for amassing some big bucks through Kickstarter.

Is Kickstarter the Right Place for All Companies?

Mark opened up the Blab by asking his esteemed guests, “What types of companies should use Kickstarter and which shouldn’t?”

Iddo proclaims that whatever is marketed must appeal to the early adopter Kickstarter audience.

He went on to state, “The more innovative features, the more it’s different than what is already out there in the market, the more likely it is to succeeded. Another important factor is that the project owner knows her way in terms of timing. Timing is super important here.”

Thomas wasn’t so sure that there is a type of business that shouldn’t use Kickstarter but he did advise, “If you’re going to launch something, crowdfunding is probably your best bet just because you’re able to get those early adopters, you’re able to tap into a community of people who will support you. And really, if you think that Kickstarter might not be a good fit for you, then I would still go because you might be able to validate your business idea and realize you don’t have a good business.”

He then went on to caution that apps are typically one product that don’t generate many pledges on Kickstarter since people are used to getting them for free.

Looking to delve deeper into the nitty-gritty of Kickstarter campaigns, Mark probed his panel, “Prior to launching your campaign, what specific strategies should you do to bring awareness and traffic to your campaign?”

Thomas declared, “The best place to start would be your PR right when you launch so you can have that spike at the beginning that boosts you up to the popular categories.”

Zach felt the best thing that can be done is to leverage your existing network through email blasts and social media, to get folks as excited as possible to back a campaign on the first day.

Iddo shared his thoughts: “Get as many pledges as you can right on the first day because you also have this bandwagon effect. The more people on there right from the beginning, the more likely you are to attract more backers.”

Mark then asked if tools like Periscope or similar platforms would be a good way to help get the word out about a campaign.

Zach replied, “Blab would be great to have because now you are basically live streaming a live event, showing that social movement, and creating that credibility right from the get go.”

Pain Points of a Campaign

Looking to gain some sage advice on how to avoid Kickstarter campaign pitfalls, Mark queried the group about the main issues and failures they have seen occur.

Iddo stated, “There are two generic problems. One is exposure and the other one is the conversion rate.”

He went on to explain that if conversions are doing well, then it just comes down to exposure, which paid publicity can have massive benefits toward. He pointed out that paid exposure will help draw in the right kind of backers and that will boost project ranking, which in turn will lead to more organic traffic.

Thomas voiced, “If you had a pain point that caused you to create a product, tell that story and don’t deviate from it.”

He also pointed out that all too often, project owners do not deliver their products on time. This causes backers to become impatient and ultimately angry. It is always best to under promise and over deliver in terms of product shipping.

Zach whole heartedly agreed, stating: “The key is really figuring out how you’re going to deliver on what you are creating, and really having a plan of action for that before you begin your Kickstarter.”

Mark asked his consultants one final questions: What were their most successful campaigns to date?

Iddo stated that his was  , a magical pair of headphones that senses when you are asleep – one that he personally backed and loved. Speaking to the campaign he stated, “You have to have a strong product, you have to test whatever you do, and you have to leave a little room for luck and momentum.”

Zach’s best was Betterback, a back support product that he himself supported. He shared this: “If you can actually see yourself wanting that product, that’s almost the best indicator that it’s going to be successful.”

This is only a peak at some of the brilliant insights shared by this highly-informative and discerning group of individuals. If you are looking for more information on turning your next Kickstarter campaign into a smashing success, you can check out the full video here or drop us a line. We can help you build a rock solid, successful crowdfunding campaign.