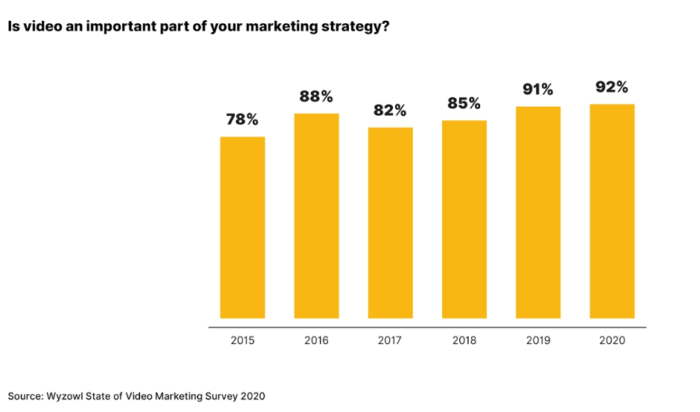 A study has shown that between 2013 to 2018, the time spent by people watching videos online has increased at an average  rate of 32%. The study also claimed that by 2021 an average individual would spend 100 minutes per day watching videos.

Consequently, video content such as demos, advertisements, explainer video whiteboard, training videos, etc. are becoming increasingly popular modes of marketing. Whether promotional or not, paid or unpaid, video contents yield outstanding results for brands that are effectively using it.

We all understand how important marketing is to generate leads, seek out prospects, and finally optimize conversion rate. Video marketing has the same purpose. So, how can we ensure its effectiveness?

One of the prime factors that directly impact video marketing’s success is the platform you publish. We recommend you publish it on social media channels. Here is why.

It seems that this generation can not do without social media. As of January 2020, the world-wide social media penetration rate amounted up to  49%. These are big numbers that suggest companies and businesses can access many of their targeted audience through social media itself. Now let’s talk about the factors that make video content one of the most prospective content marketing content in social media.

The demand for video content is high on social media

According to Social Media Today, ⅓ of the time spent on social media goes into watching videos. With stories, reels, and IGTV videos gaining popularity, the video content on social media channels like Facebook and Instagram increases. They are widely popular among users as they are engaging and entertaining.

The videos that the audiences enjoy and spend time watching are not just entertainment-related but also include how-to videos, explainer videos, demos, training videos, etc. The following facts suggest how a brand’s presence impacts consumers on social media:

Hence, it should become an obvious choice for companies to publish video content on social media due to their high demand.

It is easier to watch videos on the phone

Social media channels’ primary purpose is to provide users with a platform to connect with people who are physically away from them. Even though it has evolved into a phenomenon that keeps offering new ways of entertaining people, its function of helping people stay connected, anywhere and anytime, remains principal.

This is why mobile devices are widely used to access social media platforms among users. Upto 98.68% of 3.81 billion social media users access the channels through their mobile devices, which automatically benefits video marketing. How?

Videos are far easier to watch on mobile devices than reading blogs. Hence, social media users are gravitating toward video content. When a brand publishes its video content on social media, the target audience discovers the same and watches it, irrespective of their location or time of the day.

So, it is only smart to leverage this benefit to circulate and promote brand videos on social media.

Third-party endorsements can help you gain a lot of brand value. When someone from outside your company endorses your services or products, people tend to pay more attention and get convinced more easily. That’s why brands hire celebrity ambassadors.

Social media channels have given rise to a new community of users who have gained a significant amount of popularity on respective channels and can impact their followers and audiences’ opinions and purchasing decisions. They are influencers and have a substantial amount of authority on social media platforms.

By collaborating with these influencers, you can generate backlinks that lead the audience to your social media page to interact with you directly. You can also share your video content on their pages to get discovered.

You may be surprised to learn that 70% of teenagers trust influencers more than traditional celebrities, and 86% of women use social media for purchasing advice. As much as 49% of consumers rely on influencer recommendations. Thus, you can always utilize them to boost your sale.

People are open to advertisements

The purpose of video marketing is to create brand awareness and generate leads. The traditional way of doing that is through advertisements. With the crowd spending so much time on social media, it only sounds practical to run paid ads on these platforms. Luckily, that works.

Marketers are extensively using Facebook ads for marketing and promotion. 1.5 million small to medium-sized businesses distributed their videos on Facebook in 2015, which has only increased since. Some of these companies have most likely paid to turn these videos into ads.

It is justified since shoppers who watch videos have 1.8 times more chance of conversion than those who don’t. The stats also suggest that the users are open to promotional content and ads.

It practically costs nothing to share your video content on social media. It’s all about uploading and hitting the post button. This marks a huge difference between social media and traditional marketing.

Brand ads running on TV are expensive, especially if they want it to get featured on a popular channel. At the same time, it’s difficult to target your niche audiences. On the other hand, you can share your video content on social media with filters to focus on your target audience while sharing the content for free.

Coming to running paid ads on Facebook and Instagram, they might not be free but are still a lot more budget-friendly than running ads on TV channels. While it takes $28 to reach out to 1000 people through broadcast TV, it takes $2.50 through social media.

Prefer reading: How to Increase Social Media Engagement on Every Post

To sum it up

When it comes to video marketing, it is not only growing in popularity but is also becoming more budget-friendly and encourages innovation. The best thing about these channels is that you can be wired, quirky, or funny. The audiences do not expect you to follow a specific format. You can bring out the right image of your brand through various types of video content.

If you think videos only work on Facebook and Instagram, you are mistaken. Here is a small list that shows how fantastically videos work on other social media platforms:

Thus, we can conclude, leveraging video marketing is one of the most significant ideas for brands now.