The Tools Influencers Use To Rise Above The Noise 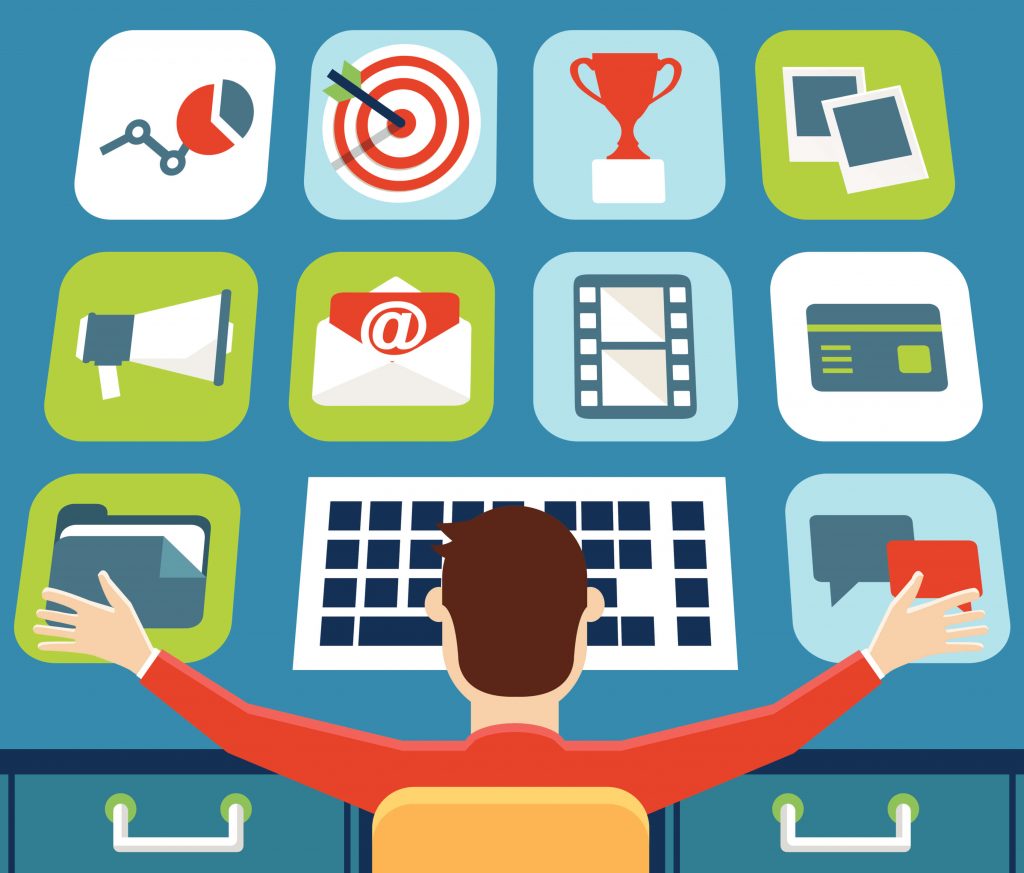 The Tools Influencers Use To Rise Above The Noise

People are consuming digital content at a faster and more expansive rate than most of us ever dreamed possible. Radio and television advertising are quickly becoming a thing of the past as online blog posts, videos, and social networks take up the lion’s share of people’s attention. Because of this, every entrepreneur, small business, and large corporation are seeking to get their piece of the action by ramping up content strategies and distribution exponentially.

The problem with this, however, is that the internet has now become completely saturated and over populated with content pouring out of every channel. This makes it extremely difficult for brands to gain the exposure necessary for growth to occur. So how exactly does a company cut through the digital noise to get noticed? It’s simple: Employ the best marketing tools and create killer content.

With a myriad of marketing tools available, Fanatics Media CEO Mark Fidelman recently gathered the absolute best of the best in his January 13th Blab conversation, which featured Ian Cleary and Brian Fanzo. Watch the full version of this revealing conversation below:

Ian Cleary is an online marketing consultant with more than 20 years of experience and the founder of Razor Social. In his two decades in digital marketing, Ian has been listed as one of the top 50 content marketing influencers globally in 2015, one of the top 40 digital strategists by Online Marketing Institute, and has contributed to Social Media Examiner, Entrepreneur.com, and VentureBeat, among many other publications.

Brian Fanzo is a change and technology evangelist, the host of #SbizHour and #CloudTalk, as well as the Chief Social Media Officer & Digital Storyteller for MyChannel Inc. Brian is a bona fide thought leader in the world of digital technology and has shared his message with massive brands like IBM and Samsung while also gaining accolades as one of the Top 50 People Most Retweeted by Digital Marketers in 2014 by Social Fresh.

Here’s a taste of the valuable insights these marketing powerhouses brought to the table:

In reality, just one tool can’t be suggested as brands are seeking to hit different KPI’s, and the biggest piece to understanding the tool to use is by asking, “How do you scale?” With that said, the tool that helps Brian the most is Buffer; this is something Brian referred to as “the every-man’s perfect scheduler.” Buffer’s intuitive social features changes how a business shares content and engages with their audience. As an added plus, Buffer doesn’t cost an arm and a leg for companies to use and even provides a free version for individuals.

Question #2: What Is Your Favorite Social Engagement Tool?

Social Pro is one that is used regularly and has gained a lot of positive responses. Nimble is another powerful tool that Ian simply loved. Nimble has various plugins available and provides tons of social information for listed contacts. As far as the perfect social engagement tool goes, however, no one can really be named as it takes a collection of tools to get the job done.

For Brian, it’s all about TweetDeck. He noted the UFC has one of the largest and most active fans bases online and all of their active engagement is run through TweetDeck. This tool allows users to track conversations across multiple verticals as well as track hashtags in real-time. Various filters can be put in place for a completely customized stream and multiple Twitter accounts can be managed from the same feed; you simply click which account you want to reply from. Brian did feel that TweetDeck is underutilized, due to its Mac exclusivity.

Question #3: What is Your Favorite Live Streaming Application?

Before the news of Twitter implementing auto play to Periscope broadcasts that have been tweeted the choice would have been difficult to make. But with this knowledge of this announcement, the clear winner is Periscope. Facebook Live is also a cool tool, and unfortunately, to Brian Meerkat is all but dead. With Periscope, users are granted a sense of security because it is owned by Twitter, but on the same token, the blue bird’s presence has not affected the platform as its own thing. And with Periscope broadcasts now auto playing on people’s Twitter feeds, “The unfiltered firehose of Twitter is now at the disposal of Periscope live streamers.” And since there is so much noise online this comes as a massive perk to businesses as, “a live stream is a collaborative opportunity for your community to shape your content and have access to you.”

The key point to note about live streaming is the relationships. His company is trying to build a relationship-true blog, but live streaming offers up an entirely new set of benefits. These types of platforms allow people to see what brands and individuals are really like and opens the door for real, meaningful relationships. This is the next evolution of social media.

Question #4: How Do I Know My Target Audience is on Periscope?

You figure this out by studying your email subscribers list. Blast out the notification and promote your upcoming Periscope broadcast or Blab conversation to your subscribers and see how many of those people join in. If you receive a bunch of replies stating, “What’s Periscope?” then you know they aren’t there.

The key is to educate your audience. If you educate them and these folks are on Twitter, they don’t have to be on Periscope; the people who influence the influencers will be there. “Periscope gives you the scale and the breath to reach the globe.” If you are looking to gain more viewers, take to Blab and let folks know that you are about to be on Periscope or vice versa.

How do you measure the success of live streaming? Are there any tools that you can suggest?

All in all, you have to ask yourself if you receive the results you wanted. You can let folks know through a webinar that you are about to hold a live stream and see how many follow. Another way would be to tease people through content by including a link and seeing how many views it gains. You can also get folks to sign up for an email list to be notified of upcoming Periscopes and see how many sign up. There are various ways to go about it, all that matters is identifying if you hit the goal you were aiming to reach.

The fact is, data is lacking on live streaming and has been on social for quite some time. You just have to ask yourself, “What am I trying to measure?” Paid social is one way to understand this relationship. Target followers on social media with Facebook ads or paid tweets that serve up content similar to materials that followers have already consumed. Alternatively, when live streaming, a hashtag can be used during the event and those who tweet out the hashtag can then be added to a twitter list and targeted with paid social ads.

When brands and individuals first started using social media as a promotional device, the thought process surrounding it was quite narrow. People thought that they had to be on all the platforms. Now it doesn’t matter which platform you are on, all that matters is that relationships are built. “We’re trying to establish a stronger connection with our audience through video so people [can] see us and interact with us.”

Question #5: What is Your Favorite Online Analytics Tool?

“I think one of the most important tools to use is Google Analytics.”

The biggest problem with analytics is that most people don’t look at them. Google Analytics is a fantastic free tool that allows users to track various data points across multiple platforms.

“I think the problem with data on analytics today on social is that people don’t know how to ask the right questions or even look at the right data for what they want.”

Simply Measured is one of Brian’s favorite tools. If the social media manager understands the analytics it is invaluable. Plus, this tool converts data into graphs and other easily understandable reports. Another great one is Rival IQ; this is a great tool for competitive analysis, influencer comparison, and also provides data in a way that is easy to consume.

Question #6: What is Your Favorite Influencer Research Tool?

Traackr; it has amazing functionality, a great user interface, and its great at identifying the best influencers available for your search. Another on is Little Bird because this tool shows if influencers are talking to other influencers and ranks them accordingly.

Traackr is a great tool but another one that is noteworthy is Zoomph. Zoomph breaks lists down to an almost niche influencer and will even let you know who is most influential in certain conversations that are occurring. Additionally, this tool provides what they call a “z score”, which is total influencer compared and related to the niche you are viewing.

We like to use GroupHigh for YouTube, which for us converts higher than any other by far, as well as Little Bird and Klear.

While there is a long list of incredibly useful tools to be utilized here, there are a heaping pile of others to check out in the full replay.

Want to know more about separating yourself from the pack in the digital world and making your presence known in a big way? Give us a call at 760-262-4252 or send an email to info@fanaticsmedia.com and we can show you how to make a splash with style.

PrevPreviousThese YouTube And Instagram Influencers Drive Massive Attendance For Future Films
NextAdvocate Marketing: What It Is And Why You Need ItNext