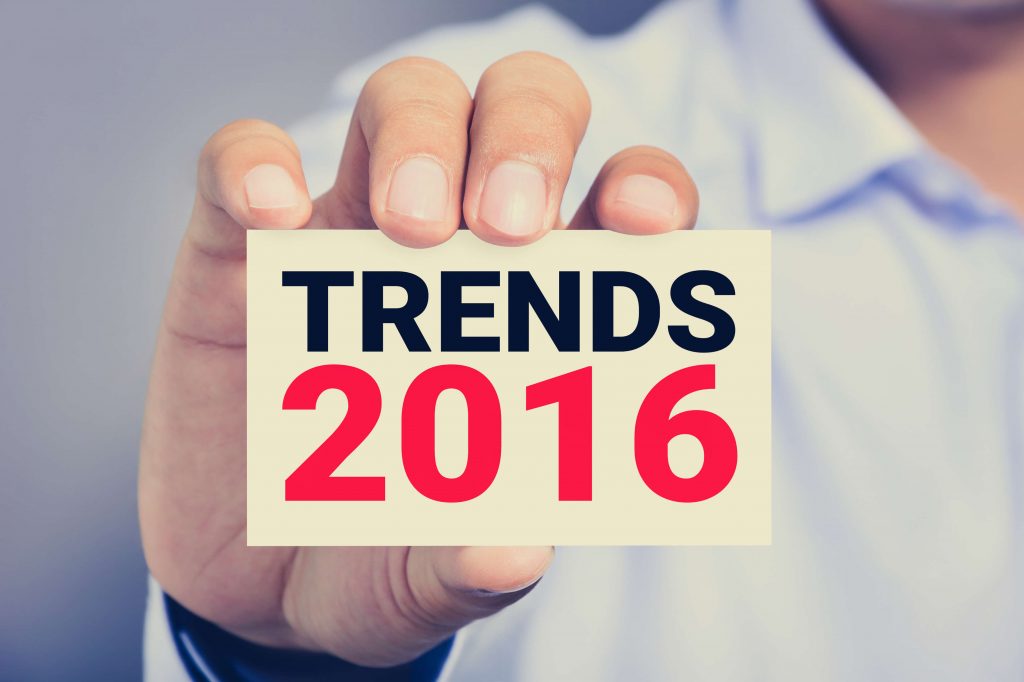 As technology becomes more sophisticated with each passing year, it continues to alter the landscape of how humans communicate, learn, and shop. These same advancements have pushed marketing forward into a new era where it too evolves at an incredible pace.

The momentum of transformation has birthed a variety of modalities for reaching consumers in effective ways in a time when people are tuning out traditional advertising avenues and more antiquated digital practices.

As 2016 draws to a close, it is time to look back on some of the most meaningful marketing trends for the year. Remember George Santayana’s immortal words; he could have been talking to every business professional the world over:

“Those who cannot remember the past are condemned to repeat it.”

This is our favorite development, because we saw this one coming. Influencer marketing grew in leaps and bounds in 2016, and made an indelible mark on how we do business online.

This year, it has been noted that roughly of 60% of marketers planned on increasing their influencer marketing budgets. This hike in financial support is due to the massive ROI potential the discipline holds.

The biggest development in the realm of influencer marketing, however, came by way of Google.

In October 2016, the biggest name in search clearly acknowledged, and displayed its faith in, influencer marketing’s continued growth when the company purchased Famebit, an influencer marketplace.

Rest assured that influencer marketing is far from dead or even fading and will continue its rise in 2017.

Free Bonus Checklist: Learn how the biggest influencers use YouTube to go big. Click here to get the bonus.

This is likely the most obvious and most prominent marketing craze for the year.

The massive uptick in digital video is directly linked to the increased use of mobile technologies, coupled with YouTube’s unprecedented popularity as a video platform. Additionally, video content is consumed at astonishing rates because people are visual learners; incorporating visuals into a piece of content increases an individual’s probability of reading it by 80%.

Video marketing’s explosion also tied in with influencer marketing strategies in a variety of ways, but outside of that realm, brands and average internet users are generating many lifetimes worth of online videos. This is where live streaming comes into play.

While the popularization of live streaming video started in 2015 with Periscope, digital broadcasting has since created an epic boom online as nearly every digital platform has integrated this feature in some way; Facebook, Instagram, Snapchat, and YouTube have all enabled their audiences to broadcast live video feeds in 2016.

Since it has been predicted that video will consume 80% or more of global internet traffic by 2019, you can count on this trend continuing for the next several years.

In addition to the dramatic amount of live videos that have been broadcast by consumers, other forms of user generated content (UGC) have also seen a spike this year.

Thanks to the massive popularity of interactive marketing features such as contests, sweepstakes, and giveaways, consumers have become increasingly engaged with marketing materials and campaign components. These types of elements often require users to submit their own photos or other materials to become eligible.

Advocacy marketing is another avenue through which user generated content saw an increase in 2016. As this modality leverages a brand’s most loyal consumers, they often help to craft effective campaign messages and input, blogs or articles, and other forms of content.

Taking a moment to look inward at industry trends, this year we have seen marketers integrate what used to be viewed as separate strategies into a more inclusive outlook on marketing.

In years gone by, things like social media marketing, influencer marketing, content marketing, etc. have been perceived as separate strategies.

In 2016, however, advertisers and promoters began to view their blueprints on a more macro scale to see that all of these practices are merely appendages of the same organism.

This paradigm change can largely be attributed to the increasing number of services and software that track various channels and strategies simultaneously.

Moreover, as the sophistication level rises online, many of these strategies are truly becoming more intertwined and interconnected.

All throughout the year, consumers are presented with opportunities to make purchases online. In 2016, the number of destinations in which an individual can buy goods or services vastly increased.

For example, Instagram recently announced that it would begin to incorporate shoppable posts into its mix. While this feature is in its infancy, it likely won’t be long until the platform follows in the footsteps of big brother Facebook to become an all-out shopping destination.

Speaking of Facebook, the company also deepened its relationship with ecommerce this year when it was announced that consumers could begin to make purchases from the Messenger application (which is another marketing trend in itself).

There have been many other progressions in the realm of marketing this year such as increased mobile advertising, the heightened need for content personalization, and the craze in chatbot popularity, but the ones listed above were some of the year’s most notable. Study these movements well as many will continue in 2017 and beyond.

Need help assembling your marketing strategy for 2017? Talk to us! We can help you craft a blueprint that will cause your competitors to resolve to do better in 2018.